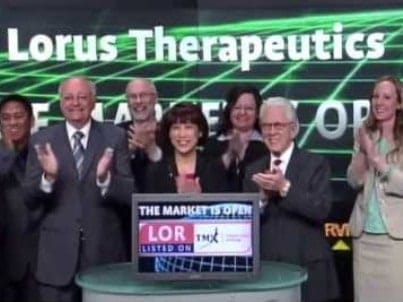 A recent dip in the price of Lorus Therapeutics (TSX:LOR) has one insider scooping up more shares.

Toronto-based Lorus Therapeutics, which was founded in 1986, develops novel anticancer therapies. The company’s pipeline of treatments includes its anti-cancer drug LOR-253, which is in phase 1 clinical trial.

Yesterday, Lorus revealed that its recently announced private placement was exercising its greenshoe provision, adding $3.25 million, for total gross proceeds of $28.25-million. The offering, which was priced at fifty cents, was led by RBC Capital Markets and included Roth Capital Partners and Cormark Securities.

Inwentash’s firm is also a large shareholder of Lorus. As of February 21st, Pinetree held 7.67-million shares, or 12.89% of the company. Pinetree acquired an additional 1.3-million shares of the private placement, but the added dilution will take the firm to about 8% of total shares outstanding.

“We are pleased to have received strong support from our current and new investors, representing prominent global and U.S. health care investment funds and Canadian institutional investors,” he said. “We are confident that the proceeds from this offering will allow us to make important advances in the clinical development and manufacturing scale up of our lead program, LOR-253, which may have potential to become an important new anti-cancer therapeutic in AML and other hematologic cancers.”

At press time, shares of Lorus Therapeutics were even at $0.55.

The trading halt on shares of Lorus Therapeutics (TSX:LOR) was lifted this morning after the company announced it will partner...