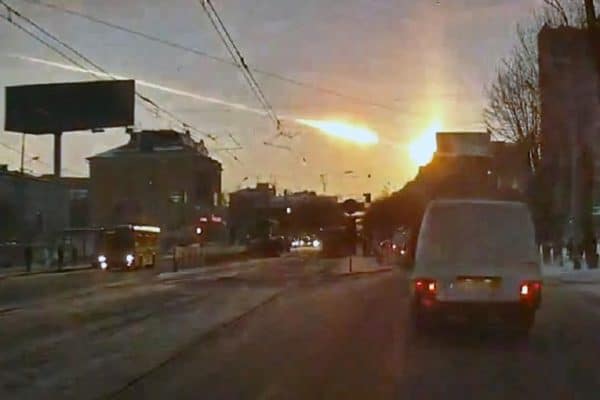 Early Friday, a bus-sized meteor exploded over Russia’s Ural Mountains. If you’re feeling kind of jumpy the last couple days, what with all these near-miss asteroids flying through our skies, you will soon be able to relax a bit.

On February 25, the Canadian Space Agency launches NEOSSat. Billed as Canada’s “Eye in the Sky”, NEOS is an acronym for “near-Earth object surveillance”. It’s the world’s first such satellite dedicated to keeping an eye on those unfeeling chunks of rock and metal flying through space that seem to have us so squarely lined up in their crosshairs.

Even the near misses seem to whisper to us “Next time” as they fly somewhere inside the range of Earth’s satellite belt, or even, in the case of the west Siberian truck-sized hunk of rock, actually enter Earth’s atmosphere, spreading Armageddon-like panic and causing physical injuries related to the powerful sonic boom. It’s certainly worrying enough to keep us on our toes, but it would be nice if we had a little advance warning, something that NEOSSat is designed to provide us with.

Obviously, since it won’t have the Earth’s distorting atmosphere in its way, not to mention our annoying night-day-repeat cycle, NEOSSat’s view will be one of unobstructed clarity. The size of a piece of oversize check-in luggage, it was developed in a partnership with funding from the CSA and Defence Research and Development Canada, built by Microsat Canada Systems Inc. in Toronto, with support from Spectral Applied Research and from Cambridge’s COM DEV (TSX:CDV)

“NEOSSat will discover many asteroids much faster than can be done from the ground alone. Its most exciting result, however, will probably be discovering new targets for exploration by both manned and unmanned space missions,” said Dr. Alan Hildebrand, Canada Research Chair in Planetary Science in the University of Calgary’s Department of Geoscience. “By looking along Earth’s orbit, NEOSSat will find ‘low and slow’ asteroids before they pass by our planet and sprint missions could be launched to explore them when they are in the vicinity of the Earth.”

Aside from preventing collisions between space junk, functioning satellites and dangerous rocks from space, the satellite’s main function will be to help compile a database of nearby objects and to act as a kind of traffic control. Seeing as an asteroid gold rush has recently been declared, with several private companies vowing to send tiny spaceships out to scavenge these objects for their precious metals, NEOSSat seems well poised to play a strategic role in this new exploration boom.

The nasty thing about the Siberian meteor was that its small size (only as big as a small bus or large truck, and plenty big enough to do serious damage) prevented it from being detected in advance by our current monitoring systems. Some people like surprises. NEOSSat would at least have been able to give us a little warning in advance. Having the advance knowledge will either reassure you, or it will just make you more terrified.