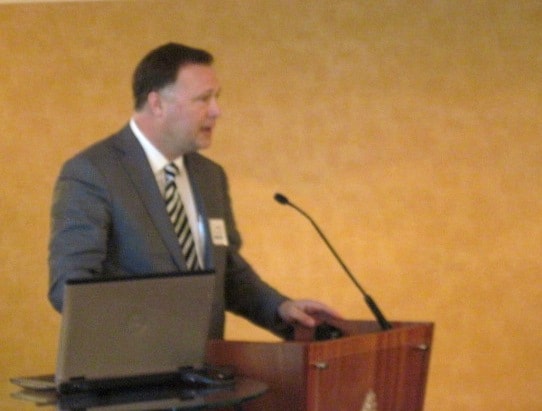 Wi-LAN CEO Jim Skippen at the Pender Small Cap Investment Conference, July 14th, 2012. After the thrill ride that was 2009 through part of last year, the time since has been relatively quiet for shareholders of Wi-LAN.

Since peaking at more than $9 last summer, shares of the Ottawa-based patent player trickled off, tripping to under $5 this past May.

Mr. Market may be fickle about Wi-LAN’s price, But Byron Capital analyst Tom Astle says the opportunities for the company are as good as they have ever been. In a research update to clients Monday, Astle detailed the value proposition that is Wi-LAN’s stock at current levels, and reiterated his BUY recommendation and $7 twelve month target.

Noting that the Jim Skippen-led company derives 80% of its revenue from long-term fixed payment contracts with well-funded tech names, Astle says Wi-LAN is an attractive and reasonably defensive option for investors. He says if you add up the nearly $200-million in cash the company has on hand, the value of its existing licenses, which he estimates at $278-million, plus the value of its unlicensed patent portfolio, which he pegs at $150-million, you get a base value of $624-million, or $5.12 per share. This, says Astle, means buying Wi-LAN at current levels means you are buying all future opportunities for free.

Astle says three recent developments could add value to Wi-LAN. First, the Byron analyst says there is a strong possibility that Wi-LAN could be asked by a major patent holder to help assert its patent portfolio sometime in the next year. He points to the deal between Nokia and Mosaid as an example of the form such a deal would take. Second, Astle says the recent win for Wi-LAN division Gladios IP in the case of Bomgar vs. 01 Communique, while not financially material, establishes a precedent that could lead to Gladios going after bigger fish. Lastly, he says that while LG did win an early round in its V-Chip defensive case against Wi-LAN, the U.S. patent office has since upheld the Wi-LAN V-Chip patents and, more importantly, allowed thirty more claims.