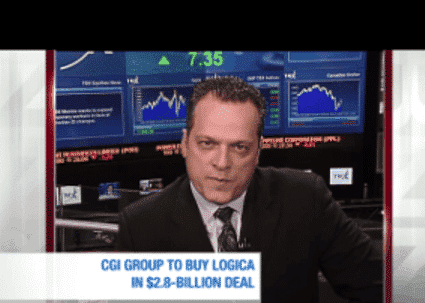 A changing of the guard.

In a massive deal announced this morning, Montreal based IT firm CGI Group (TSX:GIB.A) announced it would acquire London-based Logica Plc for $2.64 billion, a move that instantly makes CGI a top-tier worldwide IT player.

Shares of CGI were sharply higher today, closing up 14% to $23.95. In doing so, the company’s market cap rose to $6.19-billion, past that of struggling Waterloo-based BlackBerry maker Research in Motion, whose market cap of $5.4-billion was also surpassed this week by SXC Health (TSX:SXC), which closed today with a market cap of $5.73-billion.

With 2012 annual revenue of $18.4-billion, RIM is still far and away Canadian largest tech stock by revenue.

CGI management says the deal will be financed through a combination of: 46.7 million subscription receipts exchangeable into new Class A shares in CGI at $21.41 by the Caisse de depot et placement du Quebec for $1.0-billion; additional debt financing of 1.25 billion pounds sterling ($2.0-billion) from Canadian Imperial Bank of Commerce, National Bank of Canada and Toronto-Dominion Bank; and approximately $650-million to be drawn from CGI’s existing credit facility.

Appearing on BNN today, Ralph Garcea, managing Director of Technology Research at Northland Capital Partners, said the deal and the timing are excellent for CGI, because valuations in Europe have come down because of the debt crisis. He says the acquisition “fundamentally changes” CGI Group from North American centric to a global player, with 60% of overall revenue coming from Europe. Garcea points out that Logica has very little exposure to troubled Southern European countries.

CGI was founded in Montreal in that city’s Olympic Year of 1976. The Company’s name is an acronym for Consultants to Government and Industry. Today’s acquisition is the second major one for CGI in two years. Midway through 2010, CGI picked up Stanley, an Arlington, Virginia based systems integrator for a billion dollars.