The digital healthcare technology sector has been hit hard over the past year and a half, but investors can expect better times ahead for CloudMD Software & Services (CloudMD Stock Quotes, Charts, News, Analysts, Financials TSXV:DOC), according to Echelon Capital Markets analyst Rob Goff, who reviewed the company’s latest quarterly results in an update to clients on Tuesday.

“Our Q2 results reflect the strength of our core Enterprise Health Solutions (EHS) business in the face of headwinds and distractions from our non-core business and overhang from previously made acquisitions. There is an incredible opportunity for our EHS division as industry trends converge with our differentiated product offering. We are taking the necessary steps to enable the performance of our core business to shine,” said Karen Adams, CEO of CloudMD, in a press release.

CloudMD President, Adams took the company reins as Interim CEO in April after Founder and then-CEO Dr. Essam Hamza stepped down. Earlier this month, the Board of Directors unanimously appointed Adams as CEO, along with putting in John Plunkett as CFO to replace Interim CFO Sean Carr.

Plunkett said in his quarterly comments that the company is focused on reaching profitability and positive operating cash flow, which hit a negative free cash flow of $13.7 million for the second quarter.

“We are taking steps across the organization to align costs with each division’s revenue and to divest non-core assets which will provide some near-term capital. The team has made progress in cleaning up our cost structure, balance sheet, and outstanding issues from past transactions. We will continue to focus on further optimization for the remainder of the year,” Plunkett wrote.

Overall, Goff said the cloudy picture on the company looks to be clearing, even as positive EBITDA has been pushed out to next year.

“While we remain confident in the underlying value of CloudMD’s EHS and mental health capabilities, we are admittedly more conservative on the Company’s near-term outlook and thus are level-setting our expectations,” Goff wrote.

“With a flurry of negative headwinds surrounding [2021 acquisition] VisionPros, leadership departures and a weakened post-COVID revenue profile now in the rearview mirror, we look for the Company’s recently confirmed leaders in CEO Karen Adams and CFO John Plunkett, along with an expected new Board Chair soon (we look for confirmation with CloudMD’s annual general meeting later this year) to establish a renewed focus around execution and profitability,” he said.

On comps, Goff said DOC is currently trading at a 2023 EV/Revenue multiple of 0.5x and an EV/Gross Profit of 1.8x compared to its Canadian digital health peers at 1.6x and 2.5x, respectively.

With his report, Goff reiterated a “Speculative Buy” rating on DOC while dropping his target price from $1.80 per share to $1.00, which at the time of publication represented a projected one-year return of 150.0 per cent. 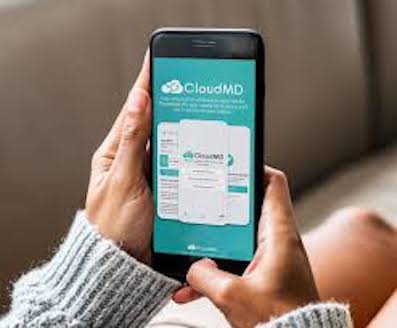 Health doc
CloudMD is a wait-and-see at the moment, this investor says

With the telehealth sector down by plenty it’s no surprise that Canadian stock CloudMD (CloudMD Stock Quote, Charts, News, Analysts,...