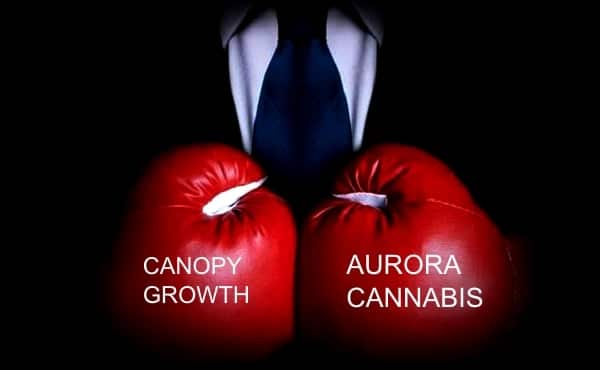 Both pot companies revealed quarterly reports recently in which they enjoyed vastly expanded toplines while cautioning that huge spends, and the often huge losses that can come with them, are simply the table stakes required for the leadership role in what everyone seems to agree will be a massive sector, and some liken to the end of alcohol prohibition.

“You can’t currently compare the leading companies in a cannabis sector, which are growing at a rapid pace, to mature industries which don’t see that high growth,” Aurora’s chief corporate officer Cam Battley told BNN reporter David George-Cosh following the company’s recent second quarter results. “We’ve gotten to the point where revenues are growing at a faster rate than costs.”

Similarly, Canopy CEO Bruce Linton addressed a $75-million loss in his company’s third quarter, saying it is funding “significant strategic investments” that will pay off down the road.

Canopy Growth is a household name. Aurora Cannabis? Not so much…

So how to compare the two companies? Of the two, Canopy clearly enjoys the higher profile. A look a Google Trends shows that, over the past twelve months, people in the United States searched for the term “Canopy Growth” three times as often as they did for “Aurora Cannabis”.

Canopy’s Revenue is higher, but Aurora is growing faster

ACB, meanwhile reported net revenue of $54.2-million, up 363 per cent over the same period last year. For the six months that ended with this recent quarter, the company posted $83.9-million in revenue, up 322 per cent from the $19.9-million topline the company reported in the first half of last year.

Aurora has the lead in medical sales

In the three months ended December 31, 2018, Canopy Growth’s medical marijuana revenue, consisting primarily of sales into the German market, increased by 170 per cent over the same quarter in the prior year to $2.7-million. Aurora, meanwhile, posted sales into the Canadian and international medical markets of $26.0-million, up eight per cent over the same period last year.

This segment of the cannabis business is extremely important, at least one analyst says.

Paradigm Capital’s Rahul Sarugaser notes that Canopy recently joined Aurora and Aphria in separating out this sales segment in its financials. This data is important to parse, argues the analyst, because companies that target clinical uses will have a clear margin advantage over those he says are pursuing “adult use” cannabis, or products consumed for recreational purposes. The pharma buy-in, Sarugaser says, is a gateway to a (US) two-trillion dollar global market.

“With an average COGS of $6.41/g*, contribution margins per gram for Canadian adult-use, Canadian medical, and international medical were $0.55/g, $3.36/g, and $6.87/g, driving contribution total margins of $4.6M, $5.5M, and $1.3M from each,” Sarugaser says. “In our review of the eight largest LPs’ Q3/18 earnings, we highlighted that medical oriented companies would drive better EBITDA margins over the short-term. This market dynamic, first seen in Aphria’s (APHA) results, then in Aurora’s (ACB) results, continues to be playing out: medical cannabis commands better economics from direct sales, resulting in medical driving higher margins than the economics of adult-use—effectively wholesale—cannabis.”

Both Canopy Growth and Aurora have wisely used strong share prices to fund acquisitions. In May of last year, ACB completed what was then the largest acquisition in the history of the cannabis sector, picking up CanniMed in a primarily stock based deal. The record didn’t stand for long. Later that month, Aurora topped that when it bought MedReleaf for $3.2-billion.

But the company has since chosen to top the tank back up. In mid-January, Aurora announced a $250-million debt financing management says it will use to fund expansion.

Canopy, meanwhile reported Cash and Short Term investments of $429.4-million as of September 30, 2019. The company’s long-term debt stood at $6.71-million.

But that, of course, was before the mammoth $5-billion equity stake liquor maker Constellation Brands took in Canopy Growth, raising its ownership in the Canadian company to 38% of outstanding shares.

Production: Canopy has the lead, but Aurora is coming on strong

Todd Campbell of Stock News recently broke down the race in production between the two heavyweights following the release of their respective financial this month.

“In the quarter, Canopy Growth remained king, selling 10,102 kilograms of marijuana and marijuana equivalent products, including oils, while Aurora Cannabis sold nearly 7,000 kilograms,” Campbell notes. “Although Canopy Growth retains the title as the bigger of the two in terms of selling product, it’s hard to knock the 502% year-over-year increase at Aurora Growth. The two companies are both plowing big money into their grow facilities to increase yield, though, so it’s too soon to say Aurora Cannabis can close the gap.”

As production ramps up, margins for both heavyweights have fallen, but Canopy’s slide was much more dramatic. In the most recent quarter, Aurora’s gross margin fell to 54 per cent, from 63 per cent in the same period last year. Management said the decrease was due to several reasons, including one time costs, a lower average selling price per gram, the impact of excise taxes, and a lower proportion of cannabis oil sales.

Canopy’s gross margins fell from 55 per cent to just 22 per cent. But the company said it expects they will bounce back.

“Excluding the costs associated with these non-cultivating subsidiaries totalling approximately $13.1-million and absorbing medical excise taxes of $2.1-million to ease the burden imposed on patients, the gross margin (2) before the fair value impacts in cost of sales and other inventory charges would have been $33.5-million or 40 per cent of sales. Gross margin was also impacted by lower average recreational business to business prices, as compared with historical direct-to-consumer medical sales.