Canadian researchers use Twitter and Google to predict disease outbreaks 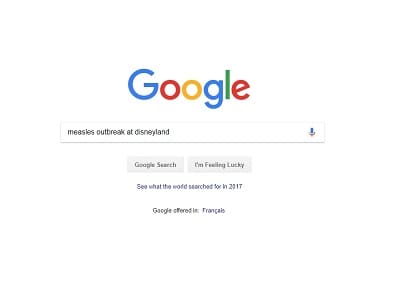 Scientists from the University of Waterloo are using social media and artificial intelligence to study real-time public perceptions of vaccines and immunization. Researchers say the new results could help predict disease outbreaks before they reach their tipping point.

In the early months of 2015, health officials in the United States identified an outbreak of measles which was traced to the Disneyland theme park in Anaheim, California. Over a period of four months, the sickness spread across a half-dozen states, causing 147 people to fall ill and/or hospitalized, with no directly related deaths.

As it was revealed that the majority of those who fell ill were either unvaccinated or had undocumented vaccination status, the incident sparked a nation-wide debate about the growing perception among a subgroup of the population that vaccines are unsafe for children.

Eventually, that outbreak and ensuing discussion led to changes in California’s laws, effectively making it more difficult for parents to exempt their children from receiving their shots, which helped to raise vaccinations rates across the state. Kindergarteners in Los Angeles County, for example, saw immunization rates for measles and whooping cough jump from a low of 90 per cent in 2014 to 95 per cent by 2017.

But the Disneyland case represents more than just a lesson in health and state responses to a potential disaster. According to researchers at the University of Waterloo, it’s also a social media data goldmine. A new study published in the journal Proceedings of the National Academy of Sciences shows how Google searches and geocoded tweets connected to vaccines and vaccinations could be used to draw a picture of the public’s perception of vaccination in and around the time of the Disneyland outbreak.

The study’s authors created a mathematical model to help predict “tipping points” in immunization, those moments when public perceptions shift to the point where vaccination rates start to be detrimentally affected. And, using the data from the Disneyland case, they tested their model’s predictive capabilities, finding that it accurately predicted both the warning signs of the tipping point up to two years in advance of the Disneyland outbreak and, importantly, showed when immunization rates would increase again, once the scare of the outbreak started to influence parents’ perceptions of immunization.

“What this study tells us is that the same mathematical theories used to predict tipping points in phenomena such as changing climate patterns can also be used to help predict tipping points in public health,” said Chris Bauch, a professor of applied mathematics at Waterloo and study co-author, in a press release. “By monitoring people’s attitudes towards vaccinations on social media, public health organizations may have the opportunity to direct their resources to areas most likely to experience a population-wide vaccine scare, and prevent it before it starts.”

“Detecting these early warning signals in social media data and Google search data can tell us whether a population is at increased risk of a vaccine scare, potentially years ahead of when it might actually happen,” Bauch says.