The Classon helmet for cyclists races past Kickstarter goal 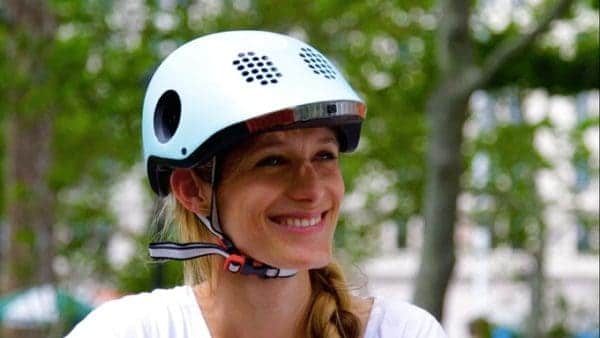 In places like Toronto and Vancouver these days, many of us are torn between the ideal of getting our exercise by cycling to work and the reality that it’s getting scary out there. The Classon helmet may make it less scary.

Distracted driving, despite the best efforts of governments at various levels, has become something approaching an epidemic. It’s impossible to measure the deterrent effect it may be having, but distraction has without any doubt become a contributing factor to the 7500 serious injuries suffered by cyclists every year in Canada.

A successful new Kickstarter campaign aims to give cyclists a tool that may enhance their safety.

Classon, a helmet that alerts cyclists when there is a car in their blind spot and activates turn and brake signals based on body movement has easily surpassed its Kickstarter goal. With 25 days to go the project has raised $48,750 from 324 backers, well ahead of its $30,000 goal.

“In these past years we’ve learned that Safety is the number one issue why people do not ride bikes in the city on a regular basis, says the Classon team. “That is why we focused our efforts on addressing safety with our newest product, The CLASSON Helmet. ”

In videos showing a Classon demo model in action, the helmet appears to work seemlessly. A bright, reddish light flashes from the middle of the helmet when a rider slows to a stop and turn lights are activated by arm gestures. An app that pairs with the helmet manages functions such as a GPS navigation feature, ride recording and fitness data, and the intensity of the lights.

A founding team from Chile led by CEO Manuel Saez and COO Traci Pollard began working on a prototype of the Classen last year and intends to have its first production run later this year. The helmet will be available in five colours and three different sizes.

Until driverless cars make the prospect of urban cycling as safe as a walk in the park, ideas like Classon will be battling the leading reason for accidents between cars and bikes: people.

“We find that 80 to 90 per cent of collisions are taking place because of human error. The driver or the cyclist is making an error in judgment by either not following the rules or speeding or not being aware,” says Jacquelyn Hayward Gulati, manager of City of Toronto, Cycling Infrastructure and Programs.

Canada’s laws on wearing bike helmets differ from province to province. Helmets are required for all people who ride a bike in British Columbia, New Brunswick, and Prince Edward Island. They are required only for those over the age of 18 in Alberta and Ontario. And Manitoba, Newfoundland and Labrador, Quebec, Saskatchewan, and Canada’s Territories don’t require a helmet for anyone.