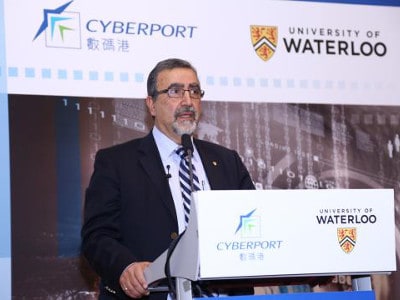 The University of Waterloo has led a contingent of start-ups associated with the school to exhibit at the Cyberport technology hub in Hong Kong as part of a forum intended to highlight the impact of wearables in everyday life.

While the relevance of Thalmic Labs and their Myo wristband is obvious to whatever happens in wearable technology and augmented reality over the next few years, O2Canada was brought along for the trip because of the specificity of their product to the Chinese market.

O2Canada was compelled to develop an anti-pollution mask, such as are omnipresent in cities like Beijing in the form of flimsy mass-produced surgical masks, where the air quality index can hit 545, or PM 2.5 million particulate matter, on a scale on which anything above 300 is considered hazardous to human health.

“When we look at the current [masks], our studies in the lab have shown that these are not only very ugly but they’re also ineffective,” said O2Canada CEO Peter Whitby told the South China Morning Post. “Air pollution is like water, it takes the path of least resistance so these nano pollutants find gaps and will enter the human body.”

While O2Canada’s intentions in creating a mask to combat air pollution were noble, their design ended up having a crucial flaw: their masks fit Caucasian faces very well, but they not the average Chinese face, which turned into a major problem given that the benefit of the mask is only apparent if it can make a proper seal.

Their initial mask was developed in collaboration with the University of Waterloo’s pollution expert, Zhongchao Tan, a professor in the Mechanical and Mechatronics Engineering department.

But after developing an effective mask that solved the problems of effectiveness and style, the team returned to the drawing board to develop a mask for the Chinese market, turning to research from Hong Kong’s Polytechnic University which had mapped 10,000 Chinese faces to create the average male and female facial features.

The mask works with a smartphone app that monitors air pollution, and also lets the user know when to change the filter.