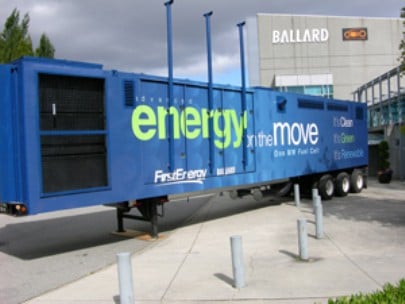 Azure paid $2-million for the interest, and its chairman, Grand Mao, will join Dantherm’s board.

Dantherm Power, which is based in Denmark, acts as a development center for Ballard ElectraGen direct hydrogen systems used for backup power in the telecommunications sector.

Ballard CFO Tony Guglielmin says the Chinese market is key for Ballard interests in the space.

“Ballard and Azure are working together on trials of our ElectraGen backup power systems with China Mobile, so we are pleased by this direct investment in our backup power subsidiary. This active participation of our China partner in Dantherm Power is expected to strengthen our positioning for the Chinese telecom backup power market opportunity.”

Ballard says Azure recently placed an order with Ballard for a 175-kilowatt distributed generation system it plans to deploy in China.

Shares of Ballard spiked early this month on a string of recent news including a four year deal with Volkswagen to to develop fuel cells in demonstration vehicles. That contract, says Ballard, is valued at between $60-million to $100-million, and came about because of the recent expiration of the five-year automotive non-compete agreement.

Ballard is using the recent surge in its share price to access less dilutive capital. Last week, the company announced it would sell 7.27-million shares at (U.S.) $1.10 (U.S.) to raise approximately $8.0-million.