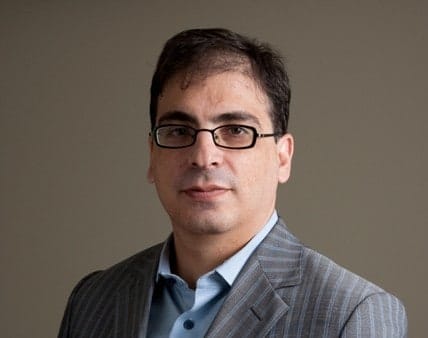 Working Ventures’ mandate was to invest in small to mid-sized Canadian companies, with Adam focusing primarily on the technology sector.

Pages 135-136 of “Blackberry: The Inside Story of Research in Motion” notes that Adamou was the first person that Jim Balsillie pitched to in a pre-IPO institutional series of meetings. Weeks later, RIM sold 10 million special warrants at $3.40 to five institutions, including Working Ventures.

(Balsillie) was the walking definition of charisma. He walked in to my office, pitched his idea, told me that BMO was preparing to shut him down, his financial statements showed a company in trouble with $8MM in revenues and $6MM in losses, and he walked out an hour later with a $5MM order from a Canadian venture capitalist who even agreed to forego a shareholders’ agreement as well as a seat on the Board.

As a companion piece to our interview with “Blackberry” author Rod Mcqueen we thought it would be interesting to see what Adam remembers about investing in what, arguably, is the greatest Canadian company ever, before anyone else.

Adam, in my conversations with you I quickly became aware that you have an encyclopedic knowledge of Canadian tech stocks, past and present. You’ve been in a million meetings where a million CEO’s have pitched you on why their company is the best. Well, RIM was the best! Did you get any kind of feeling of that at the time? A little pixie dust in the air? Or was it just another meeting?

I had a good idea of what RIM was about when they came in and did some background research on the sector before they arrived. I was intrigued before the meeting, but when Jim came in and we talked, I became very excited. I was an early internet adapter with a Compuserve number plastered on my business card as my email address and an Apple Newton on my desk. When he gave me the pitch, I instantly “got it”. I just had this strong feeling that if what he was telling me was doable, that it would happen. This whole concept of a two-way pager for email was so real and it made so much sense that my heart literally started pumping harder and I was just all over it asking him dozens of questions about how it was possible to do what he was telling me they were doing. I couldn’t be sure that RIM would be the ultimate winner, that’s just not how venture capital works, but I knew that if what I was hearing was correct, if it was possible to send emails through a two-way paging device, that it would happen. I specifically wanted to know who else was doing this and if the two-way pagers would be “push” enabled. When he told me that nobody else was doing it and that they had a patent on the push technology, I knew that we had a potential home run here.

Now, I knew that they were going to see Frank Mersch right after seeing me (we were in the same building), and I knew that they wanted an order from me to get the momentum going for the meeting with Mersch. That was their goal: get Adam excited and then go to Mersch with a lead order in hand. My concern was that Mersch managed a huge fund at Altamira and I knew that Frank Mersch was one of the smartest portfolio managers on Bay Street. If Jim was as convincing with Mersch as he was with me then Mersch would try to swoop in and take the whole deal for himself. So I told them (Brad Griffiths and Rob Fraser of GMP were at the meeting along with Jim Balsillie) that if I gave them a lead order that it would come with two conditions: First, it would be subject to due diligence and the approval of my investment committee. Second, I made them promise me that if they left my office with a $5 million dollar order that they would not cut me back if the issue was oversubscribed. I looked them right in the eye as they walked out and yelled – “no cutbacks, right?”. I ignored the bankers and looked straight to Jim when I said that. He nodded and smiled and shook my hand. In the final book, I think there were over $90MM in orders, and true to their word we were the only fund that wasn’t cut back. We received our full $5MM allocation in what ended up being a $34MM round.

What was the feeling on the street about the wireless device market in 1996? Do you remember a feeling that the space would explode?

There was no wireless device market in 1996. In 1996 there was the Palm Pilot and that’s about it and you needed to attach it into your computer with a cable. People were using it and it was becoming popular but I never bought in to it because of my less than happy experience with the Apple Newton. That’s what made my heart leap when I met with Jim. The idea of a wireless device to send and receive email was revolutionary. It was like looking into the future and knowing that this idea just made too much sense for it not to happen. Jim didn’t have the wooden prototype described in the book with him at our meeting. He had an old pager and an idea and he just happened to be pitching it to a young guy with a Compuserve number as an email address and a dead Newton on his desk.

In the past few years, for various reasons, Jim Balsillie has become a well known public figure in Canada. What were your initial impressions of him?

The guy was just full of energy. He was in his mid-thirties at the time and I was in my late twenties. I was impressed by his Harvard MBA but beyond his qualifications he was just magical. He was the walking definition of charisma. He walked in to my office, pitched his idea, told me that BMO was preparing to shut him down, his financial statements showed a company in trouble with $8MM in revenues and $6MM in losses, and he walked out an hour later with a $5MM order from a Canadian venture capitalist who even agreed to forego a shareholders’ agreement as well as a seat on the Board. What more can I say? How can I quantify beyond those facts how good and how convincing Jim Balsillie was at that meeting?

RIM IPO’d on the Toronto Exchange on October 28th, 1997 at $7.25. By the end of 1999 the stock was over $60 a share. Conventional wisdom says when a stock doubles you should sell half. Care to share your exit strategy?

I left Working Ventures in 1997 and was working with Taurus Capital Markets Inc. as the Head of Capital Markets at that time. Tim Patterson took over the account and I know that he put in another $1MM into the initial public offering. The exit occurred later on through and they sold it through us at Taurus at somewhere near the $35 per share range. RIM’s shares have split six times since then, so the $35 selling price would be the equivalent of $6 per share today. Even after taking profits on a “ten bagger”, we left $70 per share on the table. Or, to put it another way, our initial investment would be worth almost a billion dollars today vs. the $50MM that we realized on the sale. It doesn’t sound like the sale was a good idea in that light, but it made sense at the time given the mandate of the fund and the nature of the investment.

I’m sure you had been up to the Kitchener-Waterloo before 1996. When you visit companies in the area now is it a surreal feeling, the massive effect that RIM has had in terms of attracting talent and capital to the area?

RIM is surreal in and of itself. I still get a smile on my face whenever I send Jim Balsillie an email and he actually responds to it! RIM is such a huge success story and it developed over such a short period of time that it really is and should be an inspiration to entrepreneurs around the country. RIM is the poster child of Canadian innovation and business leadership but its influence goes beyond this: it changed the market for venture capital in Canada into a system that I believe is unique in the world and that enhances our competitiveness. The fact that RIM was rescued from a possible liquidation not by traditional private equity VC’s but via a hybrid transaction that leveraged the strengths of both private equity and the public markets has had a profound effect on the venture capital markets. It ushered in the move toward public venture capital and today in Canada the public markets are where the action is for innovative growth oriented young companies. Whenever I hear the statistics for “venture capital” in Canada – which nearly always excludes all of the CPC activity, all of the venture exchange activity, and all of the small to mid-sized companies on the TSX that are in reality venture stage companies, it makes me groan because these statistics exclude all of these transactions. Those with a vested interest in “private equity venture capital” exclude the public markets in their figures because it hurts their narrative about how “venture capital” is hurting in Canada. The truth is that in Canada, unlike the US, the public markets have evolved to become the primary source for venture capital financing in this country and that is a good thing, it’s a competitive advantage. That first RIM deal is one of the main reasons why the Canadian markets have evolved in this direction and this was a very positive development for entrepreneurs with great ideas and for small companies from coast to coast.